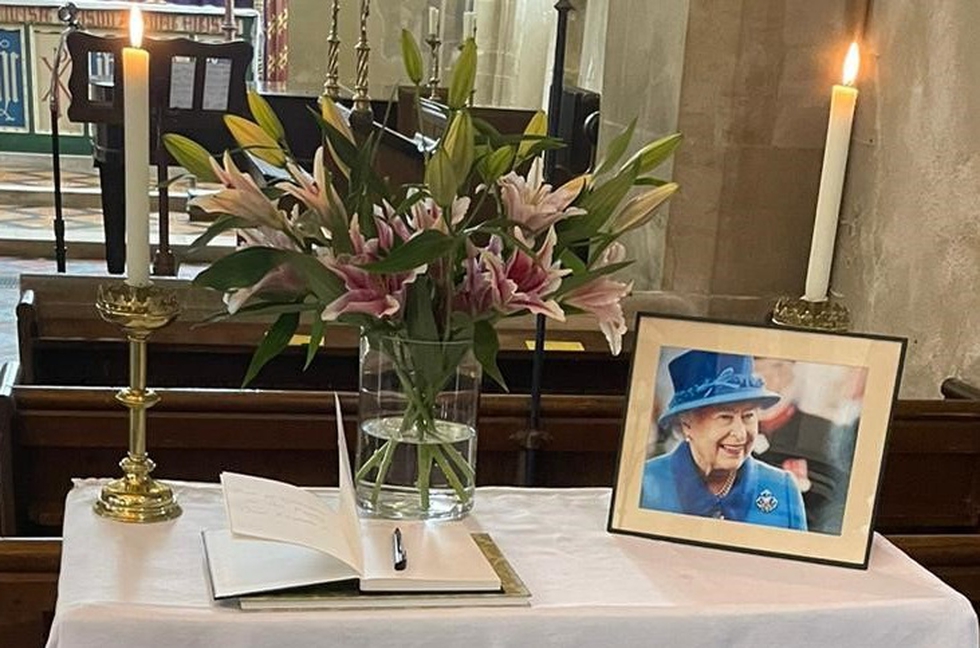 The Dean of Chichester published a statement on the death of Her Majesty Queen Elizabeth II (1926 – 2022) in which he said:

"it is with a sense of deep sadness that we have learnt of the death of Her Majesty the late Queen Elizabeth II.

"Many have paid tribute to The Queen’s careful attention to matters of State, her great wisdom accumulated through the many years of her reign, and her concern for the wellbeing and flourishing of communities and individuals.

As we absorb this news, we do so with thanksgiving to God for her self-giving devotion, her steadfast Christian faith and service."

Revd Paul Doick is the Vicar of St Peter’s Henfield, Shermanbury and Woodmancote, and said: “All of us feel a deep sense of sorrow at the loss of Her Majesty the Queen. As the nation mourns, we pray for her family, especially for Charles as he becomes King. St. Peter's has been open today for people to light candles and to say a prayer. In due course we will release details of a memorial service.

“We have a book of condolence for people to leave their message and is available every day from 8am to 6pm.

“May Her Majesty rest in the peace of the God in whom she had such an inspirational faith. God save the King.”


Revd Martha Weatherill is the vicar at Lavant Churches: St Mary’s with St Nicholas. She said: “It is with a sense of deep sadness that we have learnt of the death of Her Majesty Queen Elizabeth II.

“During her long reign she has been a source of strength and stability for the nation, the Commonwealth and the world, sustained by her strong Christian faith and deep sense of vocation.

“Many have paid tribute to The Queen’s careful attention to matters of State, her great wisdom accumulated through the many years of her reign, and her concern for the wellbeing and flourishing of communities and individuals.

“As we absorb this news, we do so with thanksgiving to God for her self-giving devotion, her steadfast Christian faith and service.

“The Church community and Parish Council have worked together to provide the space and opportunity for reflection. Both our churches are encouraging residents of the village to come and light candles and at 12 noon, the church bells at St Mary’s will be rung ninety six times. Residents who wish to express their grief through the placing of flowers, bouquets, cards etc are encouraged to place them by the Platinum Jubilee Oak Tree (next to the War Memorial) which we planted last year.

“On Sunday, we will be reflecting on what the Queen meant to us as individuals, Church, and the community of Lavant.

“We are a community united by loss but equally united by gratitude for a life well lived in the service of God and His people.”

St Peter's Church in Brighton continues to welcome visitors, saying: "We were deeply saddened by the news of HM, Queen Elizabeth’s death. In this time we leaned in, came together and ensured that St Peter's Brighton was a light to the city over the weekend as they journeyed through any existing grief or loss. We were open to all walks of life to come, reflect, pray and speak to someone if needed"

Karen Hill, the Diocesan President Mothers' Union said today: “Her Majesty Queen Elizabeth II was our national patron; she was a great supporter of our work.

“As recently as Wednesday 31st August when Frogmore House and Gardens were opened to our members and the public as her gift to us her Mothers' Union for her jubilee.

“Our members are being asked to use the prayer below during this time of national mourning.”

Mothers ' Union is a Christian mission organisation working through grassroots membership to support families and communities around the world.

Revd Rob Dillingham is the vicar at High Hurstwood. He said: This morning we kept the church open. It was a nice time of silence and space here. Mums and children dropping off at the school, people walking their dogs and those who just needed space. All saying Thank you and goodbye .“

St Mary The Virgin East Preston and Kingston, along with most of our churches, was open for prayers all day today

Fr David Hill is the vicar at St John’ Hastings. He said: “Her late Majesty laid the foundation stone of St John’s in 1951 whilst still the Princess Elizabeth. We have the special silver trowel she used on display next to the stone.

“On Sunday I shall be preaching on the first verse of the National Anthem.

“The outline is that God saved the Queen long ago through His infinite Grace, which she in turn reflected making her a truly gracious Queen. She did live long in her realm and lives now in another. Her nobility lay in the fact of her absolute devotion to her heavenly calling and thought that always trying to do what is noble and right. She was our Noble Queen. She through the grace of God is now victorious as we all shall be when God calls us home too. Freed from the burdens of this life there is no doubt as to her happiness and she enters into that glory which is the calling of us all. She was in this life and remains our Glorious Queen reflecting in her person and her faith the Glory of the One God who made us all.”