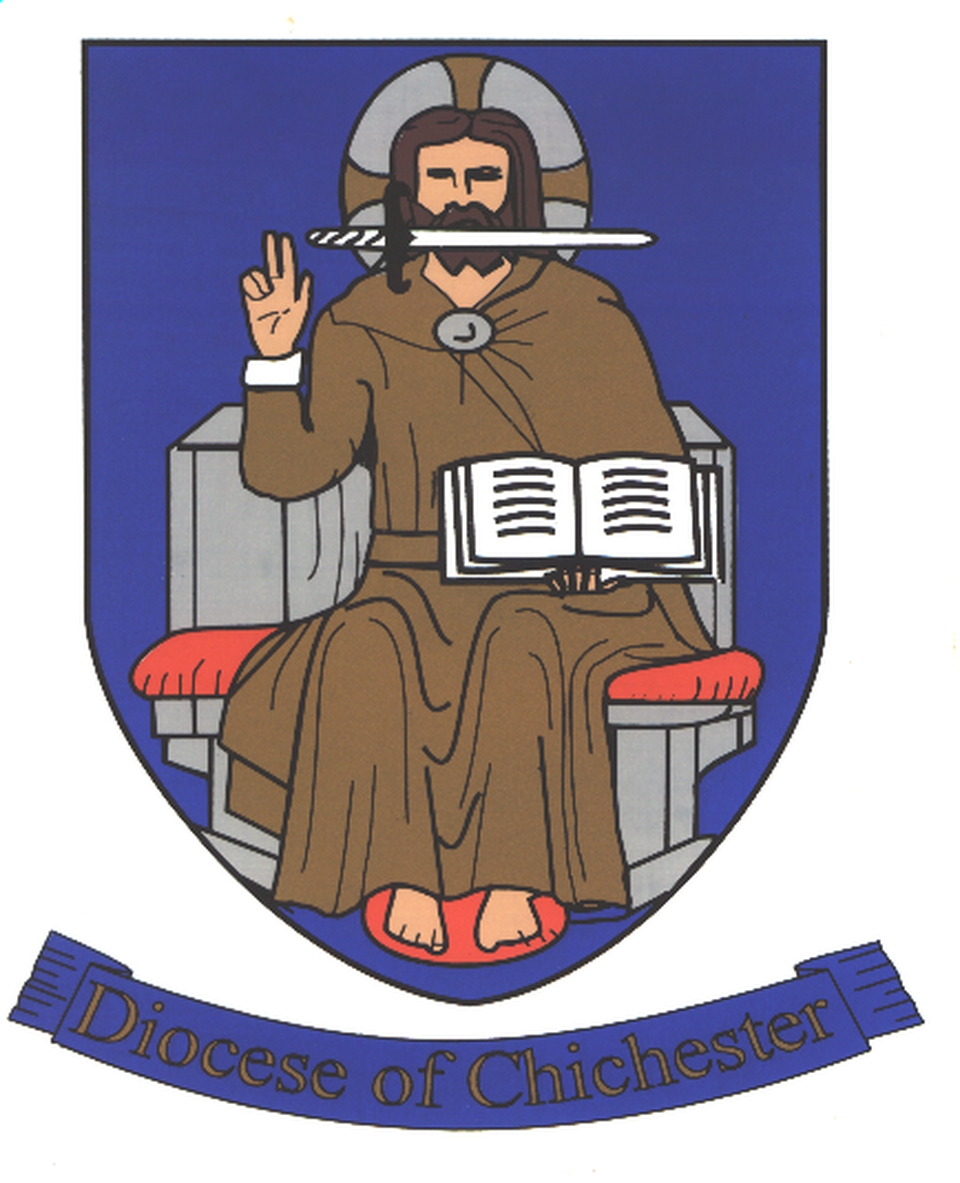 Most of the older English cathedrals have arms of a simple design, usually various combinations of crosses, swords, keys, and so on. Our Lady and the Holy Child are however shown in the top third of Lincoln’s shield, and occupy the whole of Salisbury’s shield. Excluding the diocese of Sodor and Man, which was linked with Denmark prior to 1546, Chichester is the only other old diocese which includes a human figure in its arms. Over the centuries identifying the figure has attracted some ridiculous theories.

The most common misconception, which was still being repeated in 1894, was that the arms show ‘Presbyter John sitting on a tombstone’. Presbyter John, or Prester John as he is more commonly known, was a figure of mediaeval fantasy, who appeared in many books and travellers tales. It was said that he was an all-powerful and immensely rich Christian emperor who lived in the East or in Africa and who would come to the aid of crusaders. A letter circulated in Europe in about 1165 referred to the annual visit of Prester John and his army, complete with chariots and elephants, to the tomb of the prophet Daniel in Babylonia Deserta. It was the imagery of this letter that seems to have become attached to Chichester’s diocesan coat of arms.

Much more likely is that the imagery is parallel to that seen in an early fourteenth manuscript of the Apocalypse of St John. This illustrates several passages with a figure who variously has a sword across his mouth, holds an open book, and is seated on a throne. The clearest illustration accompanies chapter 19 verses 11-16.

In this manuscript are to be seen the main elements of the diocesan coat of arms and there is thus tangible support for what common sense suggests — that the figure is that of our Lord as ruler of the nations. The image was common in Byzantine iconography as Christ the Pantocrator.

In 1626 Thomas Vicars, vicar of Cuckfield, wrote in a sermon which he illustrated with references to the book of Revelation and also to Hebrews chapter 4 verse 12, “For the word of God is living and active. Sharper than any double-edged sword, it penetrates even to dividing soul and spirit, joints and marrow; it judges the thoughts and attitudes of the heart.” He dedicated his sermon to his father-in-law, the then Bishop of Chichester:

The position of the sword in the diocesan coat of arms is a matter that has raised some questions. In the newly drawn coat of arms the sword has been placed across the mouth, whereas previously and in the cathedral’s coat of arms, the sword is placed to the right of the mouth. It seems likely that medieval versions had the former position, while later generations have preferred the latter.

A mediaeval window in Bourges cathedral, France, depicts our Lord with seven seals in his right hand and seven stars in his left. The sword is clearly across his mouth, as it is in the depiction of the same scene on the great Apocalypse tapestry in the chateau at Angers, also in France. However in both these representations the sword points to the viewer’s left, the opposite way from the diocesan arms.