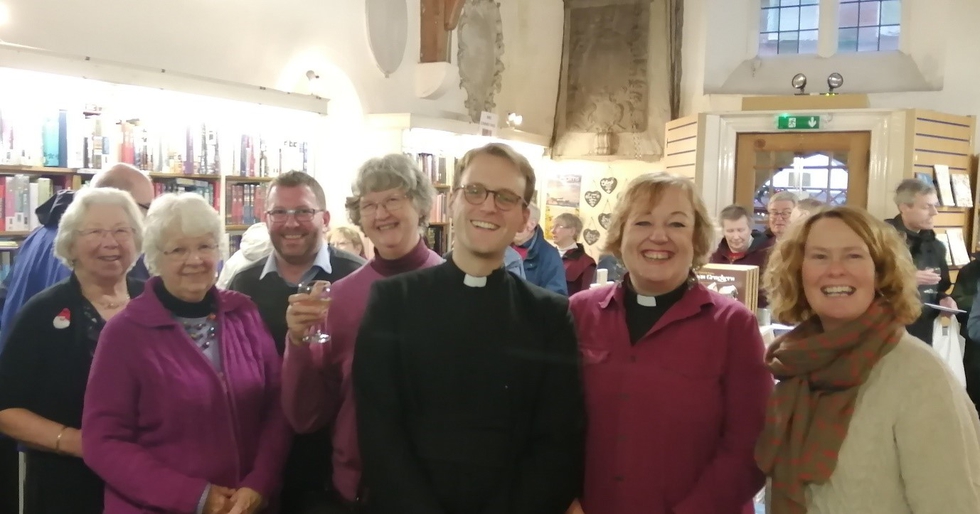 After trading as a bookshop since 1956 the business closed in August 2009. However, trading began again after a rescue mission was coordinated by a local businessman and church leader, Trevor James.

10 years ago, a service of thanksgiving was held to celebrate the reopening and so it was only fitting that 10 years on the service was repeated. Staff, trustees and customers gathered together to celebrate and to give thanks for its ongoing success and the opportunity to support the Christian mission in the city and beyond. The service was led by the new Chancellor of Chichester Cathedral, the Reverend Canon Dr Daniel Inman.

Manager, Bradley Smith, said ‘The service was a chance to thank the staff for their hard work, the trustees for their commitment and the customers for their loyalty and support. Many have been coming to the shop, in its many forms, for decades and this anniversary is as much a testimony to them and their dedication to us as it is to the staff. We are very blessed.’

The shop, overseen by the St Olav’s Trustees, some of whom were part of the original rescue team, stocks a selection of books, gifts and cards covering the full range of Christian traditions and denominations and is well supported by churches and individuals across the Diocese of Chichester and beyond.

In 2014 the shop won the Independent Small Retail Store of the Year, and in 2019 it became the first book retailer to become a corporate member of the Prayer Book Society, ‘There aren’t many Christian Bookshops around now, and to be part of the team that gets to celebrate 10 years, after many thought it couldn’t be done, and to be able to look forward to the next 10 with such great customers and friends supporting us is brilliant, and a real privilege’ said Assistant Manager Rev Sarah Manouch.

The 11th century building (circa 1050) is still a consecrated building although it is no longer used for worship. Each year a Eucharist is held on the feast of St Olav (29th July) presided over by a member of the local clergy.